Thanh Son is a mountainous commune of Thanh Chuong District, Nghe An Province, which was newly formed in 2009 to accommodate displaced villagers to make way for the new Ban Ve hydropower dam. The commune has 16 villages, 1,249 households with a total of 5,507 people. The ethnicity of Thanh Son is mainly Thai (accounting for 73%,  Kho Mu  is 25% and Kinh and other ethnic groups account for 2%). The chairman of the Thanh Son Commune People Committee (CPC) said that this resettlement was the largest resettlement ever undertaken in Vietnam, as well as the resettlement with the highest rate of poverty, with mostly single women heading the households. People in Thanh Son hardly have access to agricultural and manufacturing support from state agencies. In addition to limited funding issues from the agencies / programs of the government, the local extension agency did not have the technical capacity to help find solutions to the people’s livelihood concerns in the Commune.

Thanh Son Commune is located within the Nghe An Biosphere, the largest biosphere in ​​Southeast Asia. Unfortunately, quite a number of households in the commune resort to hunting and collecting non-timber forest products (cement, medicinal plants) from the forests around the Commune is a source of income or food. Land degradation, reduced agricultural productivity, reduced revenues from the forest, and over-exploitation of biosphere resources have created a critical situation. If no urgent measures are taken, the pressure on forests and biological resources will increasingly lead to complete destruction of land resources, forest resources and biodiversity in the region. 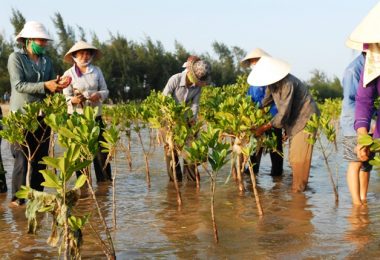 Local people and I are experiencing climate change in many ways, For instance, climate change has a serious effect on Vietnam’s mangroves. Working as the project...