This place forms pristine beaches with potential for eco-tourism and relaxation. This is the habitat of 200 bird species, including more than 50 species of water birds, nearly 60 species of migratory birds. Especially, this is also the habitat of the red-crowned crane named in the World Red Book. In addition, there are thousands of hectares of mangrove forests, coastal alluvial plains and estuaries. Currently, Kim Son coastal area is in the tourism development planning of Ninh Binh province and the district has also identified the development of marine economy and tourism economy as the focus, striving to turn Con Noi into a tourist destination in the future.

With the wild beauty of poetic nature, the paradise of many species of birds and animals,… Coming to Con Noi Kim Son, visitors will be immersed in the space of sweetness with the flavor of alluvium mixed with the taste of the land of the North.

All blends with the vastness and vastness of the earth and sky, giving visitors an unbelievable feeling.

Currently, Con Noi Kim Son is increasingly interested in developing to serve ecotourism activities, towards attracting many domestic and foreign tourists. For example, the construction of a 6 km long sea crossing road to Con Noi not only brings tourism values ​​but also contains many values, having a direct impact on the economic activities of local people.

Mr. Do Hung Son, Chairman of Kim Son district People Committee (Ninh Binh province) said that Kim Son district together determined to take the development of agriculture and tourism as the key development direction in the economic development orientation – Society in the coming time: “Con Noi tourist area, which has been approved by Ninh Binh province to invest and develop in the direction of spirituality combined with ecology, has now allowed a number of large Companies of the province to survey, and had original ideas. Currently, we have made the road to Con Noi tourist area, in the coming time, we will plan in detail, call for more investment to develop. In addition, Kim Son district is implementing the gate Kim Dai project to prevent salt water, keep fresh water and take the Tri Chinh river to develop tourism,” said Mr. Son.

In the coming time, Ninh Binh province will put many types of tourism into operation, striving to 2030 Ninh Binh becomes one of the key tourism destinations of the country, tourism becomes the spearhead economic sector of the province.

The two nature reserves of Pu Hoat, Nghe An and Xuan Lien, Thanh Hoa are located in the Indochinese green corridor... 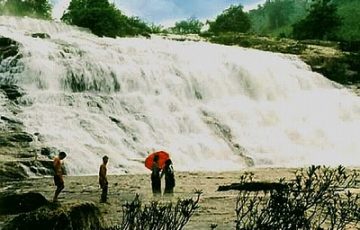 Western Nghe An Biosphere Reserve was recognized by UNESCO in September 2007. This is the largest biosphere reserve in Southeast Asia...