Local people and I are experiencing climate change in many ways, For instance, climate change has a serious effect on Vietnam’s mangroves. Working as the project manager for CARE´s mangrove project in Daloc commune, I can see the impacts every day. Let me explain some examples:

The tidal level is higher than 20 years ago. According to the local residents of the Daloc commune, it has increased to a higher level of 70 to 80 centimetres at the beach. Moreover, because the tidal level has changed, it is difficult for planting mangroves. For example, in October this year we had planned to plant Mangroves four times per month. Each planting time would last around four to five days, during the time when the tidal level withdraws to its lowest. This planting schedule usually works according to traditional knowledge of the local people and the tidal time calendar. However, this process is not working any longer and we were not able to plant four times per month. Today, the tidal times have changed and the tidal level is higher

The storms and floods are increasing more and more, and they get stronger – even in the usually calmer winter season. This is different from what people experienced 10 to 15 years ago. Then, the storms and heavy rains occurred only on the autumn season. Since the storms and rains are not following a natural pattern as they have done for a long time, it is more difficult for CARE to run project activities. For example, every year in April we used to collect seeds from the old mangrove trees which we used for planting. But now, the storms are coming earlier and all seeds are being blown away.

The rainy season has also changed. It is lasting longer, and arriving later – and it brings less water than it used to., Instead, it is raining in a different season now. For example, winter usually brought light rain with it. But now it throws heavy storms and rain on us. This change impacts agriculture and aquaculture development like farming rice fields; raising and feeding sows, pigs, cows and ducks; and cultivating shrimps, oysters, etc.

I wish that leaders who attend the climate change conference in Denmark consider and support some issues as below: 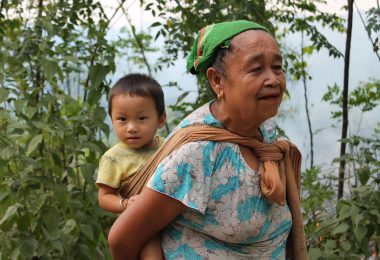 Ngoc Lam is a mountainous commune of Thanh Chuong District, Nghe An Province newly formed in 2009 from the resettlers of Ban Ve hydropower. The commune...